Non-Hodgkin’s Lymphoma is the name for a group of cancers of the white blood cells, the lymphocytes. 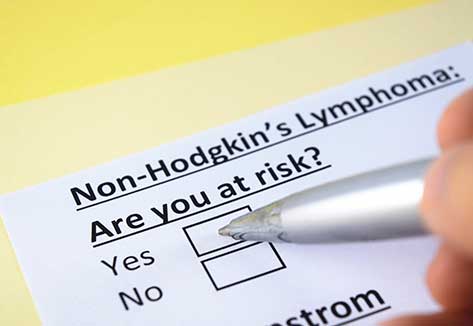 The disease, which is caused by exposure to benzene, forms in the lymph system, which is part of the immune system. Lymph tissue is located throughout the body; as a result, Non-Hodgkin’s Lymphoma can start in virtually any part of the body. Once it takes hold, the cancer can spread, or metastasize, to the liver and many other critical organs and tissues. In 2010, there were an estimated 65,540 new cases of NHL in the United States and a reported 20,210 deaths from the disease.

People of all ages can develop non-Hodgkin’s lymphoma. The disease is often accompanied by swollen lymph nodes in the underarm, neck, groin, or stomach; general fatigue; fever; sweating; unexplained weight loss; itchy skin or a rash; and pain in the abdomen, bones or chest for no known reason. If you are experiencing any of these symptoms, you should consult a doctor.

In reaching a diagnosis of NHL, your physician may rely on the following tests and procedures:

Patient History and Physical Exam. This will include a hands-on examination of the body to search for signs of disease, such as fever, lumps or pain in the body. In addition, the doctor will also record the patient’s general health habits, past illnesses, treatments and operations. You should be certain to make your physician aware of any exposure to benzene in the workplace or in the home.

Complete blood count (CBC). Blood will be drawn by placing a needle into a vein and permitting the blood to flow into a tube, which will be sent to a laboratory and analyzed for a number of things, including:

–  How much hemoglobin – the protein that transports oxygen in the body – is present in the red blood cells.

–  What percentage of the blood consists of red blood cells.

Blood chemistry study. This procedure analyzes a blood sample to measure the levels of specific substances that organs and body tissues release into the blood to determine if the levels are unusually high or low, thus indicating disease.

Lymph node biopsy. In this procedure, all or part of a lymph node is removed and sent to a pathologist, who uses a microscope to find cancer cells in the tissue. There are several different types of biopsies:

– An incisional biopsy takes out only a part of a lymph node.

– A core biopsy uses a wide needle to remove just a portion of a lymph node.

Bone marrow aspiration and biopsy. In a bone marrow aspiration and biopsy, a small patch of skin is numbed, after which a long, hollow needle (called a Jamshidi needle) is inserted into the patient’s breast bone or hip bone to take out blood, bone marrow, and a small slice of bone. The samples removed are reviewed under a microscope by a pathologist to search for signs of cancer.

Liver function tests. These studies are conducted by analyzing a blood sample to measure the levels of an enzyme called lactate dehydrogenase (LDH), which levels aid in predicting a patient’s chance for recovery.

After reaching a diagnosis, the physician will formulate a prognosis, which is essentially what the doctor believes is the likely outcome for the patient. The prognosis will be affected by a number of factors, including:

– the stage of the disease, that is, how far advanced the cancer is;

– the age and general health of the patient;

– whether the NHL is newly diagnosed or is a recurrence; and

– the blood levels of LDH found in the liver function tests.

Once NHL is diagnosed, your doctors will conduct further tests concerning the stage of the disease, which is determined by the extent to which the cancer has spread inside the lymph system or outside, to other sites in the body. Based on those test results, the doctor will categorize the NHL into one of four main stages. The disease will also be described in terms of the speed of its growth and the location of affected lymph nodes. Doctors need to know the stage of the NHL so they can set upon the proper course of treatment.

During the staging process, doctors often perform the following types of tests and procedures:

Chest x-ray. An x-ray employs a beam of electromagnetic radiation to create pictures of a patient’s internal organs and bones. It is one of the first types of medical imaging and is quick and painless.

CT scan (CAT scan). A CT scan makes a series of detailed images, shot from different angles, of an area of the body. The images are created by a computer working in tandem with an x-ray machine. Sometimes, a dye is swallowed or injected into a vein to allow certain tissues or organs to show up more clearly. A CT scan may also be referred to as computed or computerized tomography or computerized axial tomography.

PET scan (positron emission tomography scan). A PET scan is performed by first injecting a small bit of  radioactive glucose into a vein, and then using a scanner that rotates around the body making images of the points at which the body is using the glucose. The procedure helps doctors locate cancer cells because malignant tumor cells appear brighter than other cells in the images since the cancer cells are more active and consume more glucose.

MRI (magnetic resonance imaging). An MRI uses radio waves, a magnet and a computer to create a series of detailed images of a site within the body. The patient lies still on a platform, which generally slides inside a large tube with openings on both ends. An MRI is painless, but requires the patient to lie completely motionless for up to an hour. In addition, the procedure is so noisy that most people find ear plugs to be helpful. An MRI may also be referred to as nuclear magnetic resonance imaging (NMRI).

Gallium scan. This is a procedure for locating regions in the body where cancer cells may be rapidly dividing. A tiny amount of gallium, which is radioactive, is injected into the bloodstream. The gallium will collect in organs or bones with unusually high cell division, where the substance is then detected by a scanner.

Bone marrow aspiration and biopsy. The biopsy procedure that is sometimes used for diagnostic purposes may also be employed to determine staging of NHL. A needle is inserted in the breast bone or hip bone, after which samples of bone marrow, blood, and bone are all removed. A pathologist reviews the material under a microscope to detect the presence of cancer.

Lumbar puncture.  This is a procedure in which cerebrospinal fluid is collected from the spinal column. The patient rests in a curled position on a table while a small portion of the lower back is numbed and a long, fine spinal needle is inserted. The cerebrospinal fluid is then sent for testing to a laboratory. A lumbar puncture is also known as a spinal tap or an LP.

Upon completion of the tests described above, your doctor will be able to assess the stage of the NHL. There are four main stages of NHL: Stages I to IV, along with Stages E and S. The “E” means extranodal – that the cancer is located in a region other than the lymph nodes or that it has spread to areas outside, but still close to, the major lymph node areas. The “S” means spleen – that the cancer is located in the spleen.

Brief descriptions of the different stages of adult non-Hodgkin lymphoma are as follows:

Stage I, in which the cancer is located in one lymphatic area.

Stage IE, where the cancer cells are present in one organ or region outside the lymph nodes.

Stage II, meaning the cancer is located in at least two lymph node groups that are above the diaphragm or below it. The diaphragm is the thin muscle underneath the lungs that separates the chest and abdomen.

Stage III, in which cancer is located in lymph node groups on top of and beneath the diaphragm.

Stage IIIE, where the cancer is located in lymph node groups on top of and beneath the diaphragm, as well as outside the lymph nodes in an organ or region close by.

Stage IIIS, meaning that the cancer is located in lymph node groups on top of and beneath the diaphragm, and in the spleen.

Stage IIIE+S, in which cancer is located: in lymph node groups on top of and beneath the diaphragm;   outside the lymph nodes in an organ or region in close proximity; and, in the spleen.

First, cancer that is located throughout one or more organs that are not included in a lymphatic area – that is, organs other than a lymph node group, the thymus, tonsils or spleen – and may also be located in lymph nodes near those organs;

Second, cancer located in one organ that is not included in a lymphatic area and has also metastasized or spread to lymph nodes or organs at a great distance from the cancerous organ; and

Third, cancer that is located in the bone marrow, cerebrospinal fluid (CSF), liver, or lungs (other than cancer that has metastasized to the lungs from areas close by).

Treatment for non-Hodgkin’s lymphoma will vary depending on a number of factors, including the  patient’s age and health overall, as well as the stage of the lymphoma. Many of the same therapies are used to treat several different stages of the disease. Patients should always consult with their doctors about which treatment options are available.

For some of the early stage and slow growing, indolent lymphomas, doctors may recommend:

– Chemotherapy in conjunction with radiation therapy.

– Monoclonal antibody therapy either with or without chemotherapy.

– Radiation therapy focused on the region where the cancer is located, and possibly the lymph nodes nearby.

For some of the more aggressive or advanced stages of the disease, doctors may rely on the following treatments:

– Chemotherapy, either with or without steroids.

– Monoclonal antibody therapy, either with or without combination chemotherapy.

– Radiation therapy focused on the region where the cancer is located and nearby lymph nodes.

– Radiation therapy and/or chemotherapy for pain relief and to improve quality of life.

– Watchful waiting for those without symptoms.

For some patients, you and your physician may decide that you are a good candidate for one of the ongoing Clinical Trials in which new and experimental treatment options are being tested. General information about available Clinical Trials can be found on the National Cancer Institute website. Among the many trials ongoing are several that may offer hope for patients with NHL, including:

– Chemotherapy, either with or without vaccine therapy.

– Chemotherapy with or without irradiation to the entire body or with radiolabeled monoclonal antibody therapy, followed by stem cell transplant, either autologous or allogeneic.

If you have been diagnosed with non-Hodgkin’s lymphoma (NHL) and you suspect that it may be related to benzene exposure, please contact us for a free consultation. You should know your legal rights.