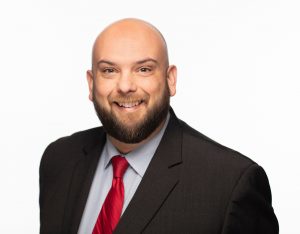 Aaron is a native Texan and grew up on the rolling plains near the Panhandle. The son of a mechanic, his earliest work experiences were cleaning a shop and twisting wrenches. He served as an artilleryman in the United States Marine Corps from 2001 until 2007, receiving an Honorable Discharge upon the completion of his service.

His legal career began as a Legal Assistant at a plaintiff’s personal injury firm where he served clients who had been injured by corporate negligence.

Aaron graduated from Texas Tech University with his B.A. in Philosophy in 2013. He attended the University of Richmond School of Law in Richmond, Virginia the following year. While in law school, Aaron obtained certification as a student lawyer where he prosecuted criminal cases and, later, assisted indigent clients with family law matters. He graduated with his J.D. in 2017 and moved back home to Texas.

Before joining Allen Stewart, P.C., Aaron worked for a general practice firm in rural Texas where he assisted clients in a variety of legal matters.

He is now able to combine his blue-collar background in automotive repair and his passion for helping clients take on corporations by working on the firm’s breach of warranty cases.